I’m mooning over moonshine. I think this should be a country song if it isn’t already.

A couple years ago at Thanksgiving we did a taste test between a secret stash and some commercial “moonshine”. The clear winner that holiday was the real moonshine, in its unlabeled bottle. It has a sweetness on the nose that the commercial stuff didn’t. A nice finish, with a hint of smoke and warmth. It lingers on the back of your throat, leaving this hmmmm, something familiar, but unrecognizable.  The commercial stuff we tried, didn’t have any depth or complexity.  It just tasted like alcohol.

Back in January when the Normal’s and I went to Bluegrass Underground for the first time, I took a detour and found local Tenn South Distillery to visit.  This was a charming little distillery, off the beaten path, that was well worth the visit. I had the place to myself and got a tour in addition to a tasting.  I left with several great products including an aged gin, a Tennessee whiskey, and one of their moonshines.  They had all the flavored stuff, but I don’t care for those.  Their regular ole’ moonshine is quite nice and sip-able.  Next to my real ‘shine, the nose is a bit boozy, but it has a beautiful sweetness at the finish, like you can almost taste the corn.

I just sipped and savored this week, no cocktails.  Be sure to see what Meg did with this week’s challenge. 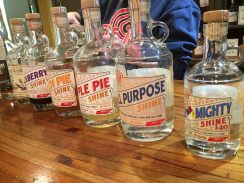 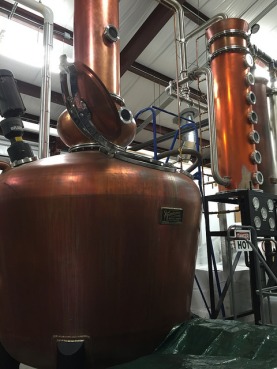 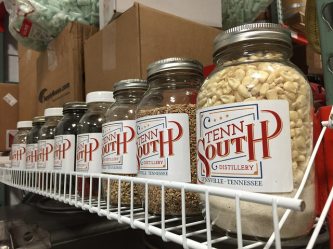 Since I couldn’t find a song, I came up with my own verse for
Mooning over Moonshine…

We all have that story.  You know, the one where we do shots of tequila and then end up ridiculously sick.  Mine was on my 21st birthday.  So was yours?!  It took me years to drink tequila again.  I was more scared of tequila than I was of whiskey… hmmm… maybe not…

I am so thankful tequila and I made up.  It really is one of life great pleasures.

According to our author, much of the popularity and “premiumization” of tequila is thanks to Patron.  It certainly was the first tequila I thought was something better than swill.  I can’t recall the name of it now, but there was (is?) a tequila bar in Portland.  That was the first time I had ever heard of a shot, one single shot, of tequila costing $30+.  I didn’t spend that, but I did try some that certainly made me rethink tequila.

The key with tequila is buying one that is 100% agave.  Many will say agave tequila, because like whiskey they have to have a certain percentage of agave to be called tequila.  There are different types of tequila.  Silver or blanco, is an unaged tequila.  Clear in color, right off the still.  Then there is reposado, where it has “rested” anywhere from two months to nine months in wooden vessels.  Finally, there are anejo, meaning aged.  These are aged at least a year, but can spend any where from two to four years in a barrel.

This week also would have covered mezcal, but I have a good stock of tequila and decided to stick with what I had on hand.  I’ll double back and hit mezcal on a week I foresee another fail.

My friend P and I used to drive home from work on a back road, winding through Oregon City and we stumbled upon one of the greatest margaritas of all times.  We still refer to this as the Steven Margarita.  We made a rule, we could talk about work for one drink, then when the second one was placed in front of us, all talk of work had to stop.  These margaritas cured everything!  When Steven got a new job and left us to fend for ourselves, we attempted to recreate his magic.

There is really nothing better than a fresh, from scratch margarita.  But most of us don’t have that kind of time or patience during the week.  So, I came up with the Steven Shortcut.

In a rocks glass, muddle 1 or 2 wedges of lime
1/2 oz triple sec
2 oz tequila of your choice
top with about 4 ounces of Freshies Margarita Mix*
Sprinkle with pink Himalayan salt (or whatever you have on hand)

Stir and drink. ahhhhhhhh
*Freshies has no high fructose corn syrup and if I can’t make fresh, its my favorite mixer. 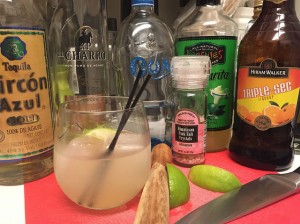 I have three tequilas on my bar, one purchased purely for the pretty bottle, one for mixing, and one for sipping or mixing.  This is the first time I have ever sipped all three side by side and I’ll admit I was surprised.  The pretty bottle may be my new favorite mixer, especially for people who think they don’t like tequila.

Coa Silver was about $15.  It has a little boozey nose, but it tastes like water.  Quite smooth, but it got lost completely in the drink.

El Charro, a reposado, has been my mixer, and by itself I was not impressed, but it stands up quite nicely to a mixer.  Giving my margarita a hint of something, with that little bit of age coming through.

Finally, my sipper/mixer has been Zircon Azul, but I think it’s been bumped in favor of the other two.  Good, but a little more expensive and not any better.

A few years ago, I had the opportunity to try some very nice tequilas and you can check that out here.  Be sure to see what Meg drank this week.

This Toast Tuesday I leave you with a poem…

Tea cups and tissues everywhere
The big chair is my lair

A week off work would be grand
Except a cold is never planned.

For the pollen to go away
And never come, not any other day
On this I do not sway.

I think I blew my nose too hard
with it went my brain, maybe not

now I’m going back to bed

I am not a poet. Words just come to me occasionally and if I don’t put them down on paper they swirl in my head incessantly. So that’s what I’m doing today.

Humidity so thick you can cut
Happy dogs enjoy the muck

I am so far behind…

I’ve started a dozen posts
before I can finish, I’m toast 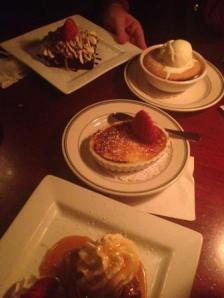 Until then, please know I intend
to find my way home, again