This week in The Year of Drinking Adventurously, I’m going to briefly flashback to when I began my job several (seven as of last week, to be exact) years ago. Happy hour was the most glorious time of the day.  I’d get home and make myself a vodka martini. Shaken. Three olives.

I had a very simple drink and rarely did I waiver. Slowly but surely my palate for spirits evolved, I became more adventurous, and my drinks became more complex.  One thing remained fairly constant as I explored different different cocktails, I enjoyed the flexibility of vodka. It’s a chameleon.One of the great things about vodka is its purity and simplicity. With its colorless, odorless, tastelessness, you can mix vodka with just about anything. You can also infuse it with just about anything. 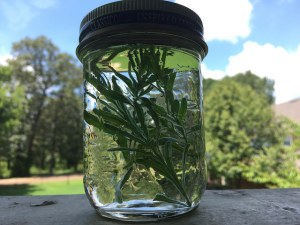 This week our author goes on a bit of a rant about how infusions took a turn for the worse in the early 2000’s, especially when they started infusing vodka with things like gummy bears. I agree, this is taking it a bit too far. I’m also horrified by the ridiculous flavors of glazed donut or cotton candy. Clearly these aren’t flavors that occur naturally.

My patio is full of herbs purely to be used in cooking and cocktails. This summer I made a lavender infused vodka. I wasn’t really sure what I was going to do with it, but taking to the Google, I found a few ideas and here is what I did.

Combine all ingredients in cocktail shaker. Add ice and shake hard for 20 seconds.
Double strain into rocks glass filled with ice and top with about 2 ounces club soda. 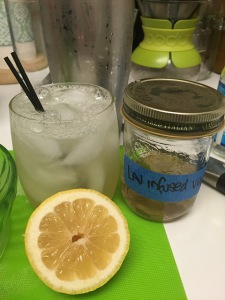 I’ve tried in the past to work sage into my cocktails.  It is a strong flavor and can be overpowering. I used small, fresh leaves that came through, but did not overwhelm the drink. One of the drinks I made I slightly reduced the lemon and the sage was more pronounced, but not overwhelming or off-putting, just more savory. The lavender and sage worked well together, giving the drink a balance. Sometimes lavender in a cocktail can feel like you are drinking perfume.

Now run along and see what Meg did with her vodka. She’s more a fan of the dark spirits so I’m excited to see where her tasting took her.

Cheers to another tasty Tuesday!