I love mornings in the yard. I sit with my coffee, enjoy seeing what’s growing, watching the birds, and finding …

I’ve been snapping most days. Some days just seem to fly by and come to end before I realize I’ve …

I have a horrible habit of waking up at 2am. Some days I can roll over and go back to sleep. Other days there’s some lightening bolt of an idea. That was this morning.  I’ve had these pictures in my phone and knew which ones I’d post when I saw the weekly photo challenge prompt in my reader. But since I’ve been mulling over the post I wanted to do, two other photo opportunities have presented themselves to me.

As a kid, I went to Henry S Jacobs camp for many summers. Maybe my first or second year, we were having a campfire sing along and they started singing a song about dead puppies. I hated this song, started crying, and made them stop. I find some humor in this now, all this time later. Now, what I really find funny is Loudon Wainwright III‘s Dead Sunk in the Middle of the Road.

My sister-in-law, also referred to here as Mrs Normal, is the Normal family mix-master. She makes the best mix tapes (now cd’s, but that just doesn’t have the same ring). It was on one of this masterpieces that I found Dead Skunk and I don’t feel so guilty about the puppies.

So, this one goes out to Mrs Normal and Loudon Wainwright III.  I give you my creepy entry for this week’s photo challenge. 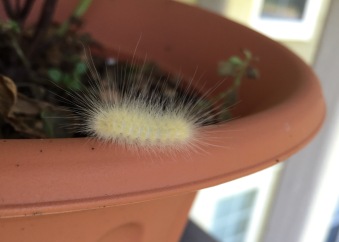 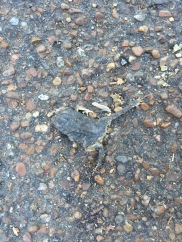 dead frog in the middle of the road…

something had dragonfly for dinner and had leftovers

a cicada emerging… this was creepy!