Portland doesn’t see snow too often and when we do most folks just don’t know what to do.  The powers-that-be at work decided we needed to stick it out for far too long.  So by the time they decided we should go home the road were clogged and buses were way behind schedule.  I hopped on the first bus that would get me across the bridge then hoofed it 20 blocks in the snowy wind to a bar where I hoped the girls would catch up with me.  They weren’t too far behind and we had a good afternoon of beer and bar bites before snuggling in for a long winter’s weekend.

I woke early Friday to call the hotline to see if I had to go in.  First call said we had a late start – better than nothing.  What was even better was when the message updated and the office was CLOSED!

I had a day of nothing.  Not one single responsibility and no way to get out to visit anyone.  So what did I do?  Started baking… the day started with bacon cheddar scones and finished with an olive and parmesan focaccia.

I’ve mentioned before I’m on a quest for a good, reliable scone recipe.  I’ve narrowed down some of the things I like and the way certain ingredients react.  This day I used King Arthur’s basic scone recipe.  Instead of adding fruit or nuts, I added bacon crumbles and shredded sharp cheddar.  I reduced the sugar by half since it was savory.

I like my scone to be a few bites instead of a meal.  So I shaped the dough into a ovalish rectangle then cut that into 4 strips.  From each strip I cut about 6 or 8 triangles.  I put these on my silpat and topped each with a few sprinkles of cheddar. 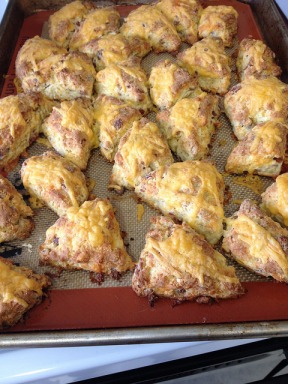 This recipe suggests you put the entire baking sheet in the freezer for 30 minutes before baking to solidify the fat and relax the gluten.  I did this, then baked for about 20 minutes.

This is hands down, my favorite scone recipe so far.  The crumb was tender and flaky.  The recipe came together so easily and is quite versatile.

I had hoped this was going to be a snow day, so I had started the Bread Baker’s Apprentice Poolish Focaccia the night before.  Then midday I started the dough. 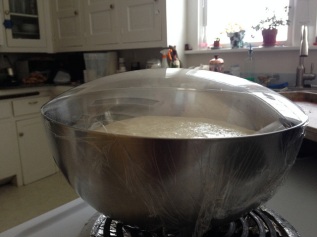 I love this image.  This is the power of yeast at work.

Fast forward to dinner time.  I took half of my focaccia dough and instead of using the herb olive oil the recipe suggested, I folded in 3/4 cup olive salad and about a cup of freshly grated parmesan.  The only thing I’ll change next time, is add a little parchment under the dough.  I put the other half of the dough in the fridge for a focaccia pizza the next night.  That one didn’t turn out very pretty so you don’t get pictures of that.

To go with my focaccia, I made Ina Garten’s easy tomato soup.  I made a few modifications to her recipe since I was snowed in.  I’ll make it again with a little better preparation.

Bare in mind, this baking was all just Friday.  We ended up closing the still all weekend.  Its a rare day that I do nothing and rarer still, that I have 3 days of solitude and laziness.  I didn’t bake another thing.  I’d baked myself out on day one.  I did finish the weekend with pulling a nice steak out of the freezer and making myself a decadent dinner. 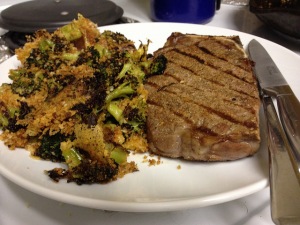