Eating good on Hawthorne just got a little easier, not there wasn’t already an ample supply of great food.  But, Lardo opened it’s brick and mortar restaurant location on Friday.  This cold has impaired my eating and cognitive skills, so much so, that on Friday afternoon while driving home with Christa, I wondered when Lardo would be opening.  All hail my iPhone and it’s speedy google abilities.  I found it was opening on Friday July 6.  Without another word, Christa takes a hard left and I look at her like she’s mad.   Where are you going?  It IS Friday July 6th. Ooohhh, right!  Good thinking.

We walked in to the refreshed space with all of its beautiful new wood and mostly well stocked bar.  There was the slight air of chaos, but this being opening day, that was to be understood.  We placed our order and got it shortly.  Me: the pork meatball banh mi.  Christa: double burger with pork belly and cheddar.  We cut each in half and shared along with an order of dirty fries.  I’ve had the regular fries before, which are quite good topped with parmesan and fried herbs.  When we asked what made the fries dirty, the gal told us there was bacon on top.  Sounds great.  But, oh no, there wasn’t bacon on top, it was fried bit of pork belly and pork rind.  glutenous yumminess that was out of this world! 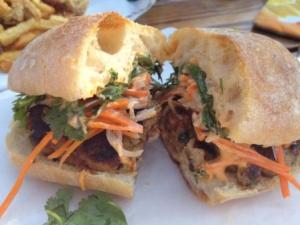 My biggest (and most vocal) complaint was now that they are in the heart of distillery row, they had none of the row’s spirits on their bar.  I talked to the bar manager and we will be remedying this shortly.  Other than them not stocking local spirits on the bar, my only other beef was there were folks smoking on the patio.  Hopefully they’ll curb that once they get things better under control.  We did hear that later in the evening, that service was incredibly slow (and they were packed), but all the food was still outstanding.  When it was a food cart and one guy was cooking, it took about the same amount of time to get your food.  I’m sure they’ll get their rhythm in no time.  Being where they are located, I’ll be going there often.

Saturday night was Coava Coffee’s second anniversary party.  Lydia of Tender Bar was serving up New Deal cocktails that were quite tasty.  I had both the Ginger Fizzle and Bumble Berry.  With it being 85ish degrees out (and 110 inside), I skipped trying the milk pUnch.  The Ginger Fizzle was good, but the Bumble Berry was great.  We all decided it tasted like lifesavers made with fresh berries.  It went down easily.  As a non-alcoholic option, she had made a fresh ginger beer which was just the right amount of big ginger flavor.  The Koi Fusion truck was parked outside to provide food.  Bar was free and flowing, so I didn’t mind paying for good food.  It was screaming hot in the space and since I get up so freaking early, I tucked out about 9:30.  I heard the event went well into the night with a dance party in another part of the space.

Since, I still have not shopped for groceries since I got this cold, I’m driving to work today so I can shop on my way home.  I’ll be stopping at Coava on my way in for my morning coffee and thanking them for a great event.  Off to work I go.  Hope everyone is staying cool and enjoying the glorious summer that finally decided to show up in Oregon.