My neighborhood has a bit of a bad reputation. The lingering moniker is Felony Flats.  I think it has out grown that.  The city has put a lot of money into rebuilding and rejuvenating neighborhoods all over town, including mine, Lents.

I live just 2 block from a great city park. It has baseball fields, soccer fields, a community garden, a small gazebo for concerts, a playground, and an off leash area.  I’ll give you one guess what area we frequent most.  Coe would call it her playground.  A few years ago, the city tried to put a soccer complex here to host some semi-professional team and the neighborhood went nuts.  We banded together and made our voice heard that we did NOT want our park to be sold out to the highest bidder.  In the end, one of the fellas spearheading this endeavor said he didn’t want the soccer stadium where it clearly wasn’t wanted.  Crisis averted.

There are plenty of great old building and shop spaces that need someone to love them.  Unfortunately, businesses have come and gone in attempts to bring more food and culture to my ‘hood.  But one of the most exciting things going on now is a rejuvenation of the old Bob White Theater

New owner Nick Storie has bought the building after its been closed for 27 years.  He has a crew in there cleaning and repairing getting the space ready to face the world again.  This past Saturday he hosted a party to say hello to the neighbors.  A couple hundreds folks turned out to see the space.  He got up and said a few thank you’s.  What most got our attention was when he said tell me when you want to use the space.  Don’t ask.  I’m from New Jersey, just tell me.

They had music and free beer flowing.  People were happy and excited to see what would be. It was fun running into neighbors and friends I hadn’t seen in awhile.  The kids had a good time dancing to the music.  Remember when we had no inhibitions? 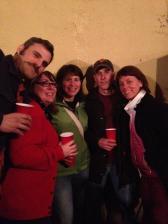 The theater, for a brief stint, was used as a private residence, where the guy was restoring pipe organs.  So all sorts of neat stuff is still around from that time.

We left the theater that night with all sorts of visions and ideas running through our heads.  Thanks Nick for bringing back the theater.