This week I’m supposed to be telling you all about grappa, but a couple of things have stopped me. Number one of which is all the grappa I found locally was $60 a bottle. That just wasn’t in the budget this time, especially when our author states that the flavor profile can be somewhere between furniture polish and lighter fluid.  I may revisit this some day and if you have suggestions to offer, please post them below.

This week instead of following our guide, I have taken a hard left and then down a tree lined driveway.

Every family has its traditions and in my Portland family the tradition is I make the charoset. This week is the Jewish holiday of Passover and it usually kicks off with a big dinner with lots of wine, and instead of a song about a reindeer, we sing about a goat. The centerpiece of the dinner is a plate with an assortment of symbolic foods and charoset represents the mortar. The way I make charoset, it is a simple salad of apples, pecans, cinnamon, honey, and wine.  I even made a charoset inspired scone one year, you’ll find that here.

I threw out an idea to my ladies group, half joking, that this month’s happy hour at home would be during Passover and a challenge for them to make dishes that were kosher for Passover. They quickly picked up the gauntlet, and then almost as quickly went into a panic. I held their hand and posted some links for recipes, traditional and non. I’ll keep you posted on how they do.

Not only was this a challenge for them, it was a challenge for me. To come up with a cocktail menu that is kosher for Passover I had to put my thinking cap on.  This is what I’m serving: a white wine and peach sangria, a strawberry margarita, and an apple cinnamon martini.  I should stipulate at this point that I keep kosher during Passover in fairly loose terms. I follow the rules, but I do not feel the need to buy special ingredients that have been blessed by a rabbi just so I can pay twice as much for it. Agave is not a grain or flour, it does not rise; therefor let it be written, the margarita, if made with good simple ingredients, is kosher for Passover. More on the margarita next week.

I’ve told you before my ladies like their drinks sweet. So I always have to have at least one on the menu for them. That’s where the apple cinnamon martini comes in. I started with an idea, Google helped solidify it, and experimentation made it so.

Pour into a martini glass and add a few drops of angostura bitters.

**Apple cinnamon simple syrup
1 cup Martinelli’s unfiltered apple juice or fresh cider if you can find it
1 cup granulated sugar
1/2 teaspoon cinnamon
Heat in the microwave or stove stop and stir until combined. Allow to cool to room temperature before using.

This is certainly too sweet for my normal pallet and the bitters help cut the sweetness and bring out the spice of the cinnamon. I’m certain though my ladies are going to enjoy this.

Be sure to see what Meg drank this week.  I can only hope she drank grappa for the two of us.

Here’s to Tasting another Tuesday!

One of my favorite things about Passover is the charoset.  and truth be told, my charoset is the only reason I get invited to the Seders I do. 😉   I will admit, my charoset rocks!  I live off of it for a week.  It’s so easy to make, every year I think, why don’t I make this more often?

With my Baking for a Cause series, I thought about the flavors I love so much during Passover.  That, and I always buy too many apples.  I came up with the Cinnamon Apple Scone.

3. I took the icing technique and recipe(ish) from King Arthur.  Pour some of icing onto a parchment (I used my silpat) and plce the scone in the icing, swirling around to cover the bottom.  Then pour remaining icing over the top and use a baking brush to cover the scones with icing. 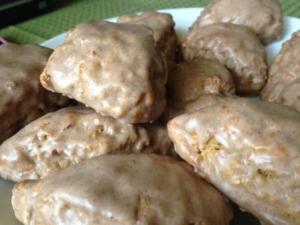