This week, its all about bitters.  Not being bitter because your boyfriend refused to dig a hole for your heart shaped fountain, but taking your cocktails to a whole new level kinda bitter.

Week 20 has us exploring aromatic bitters.  Our author guides us through the classics and a few new staples that we should all have on our bar.  While I don’t have quite the bitters collection I want, I have the staples and a few extras. 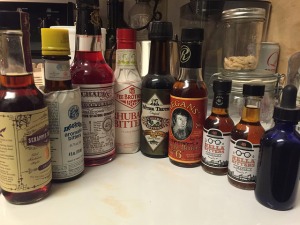 Bitters are used a few different ways in cocktails, but the end result is the same; to give your cocktail that… hmmm… little something.  Or as it was once described to me, bitters offers that sidestep from being good to being really interesting.  You want something that both complements and enhances.

If you were to only have one bitter for your bar, then the old school standard is Angostura Aromatic Bitters, available at every liquor store across the globe.  There was no rhyme or reason for how I threw the bitters on my counter tonight to snap this picture, but Angostura is 2nd from the left, distinctive in it’s white paper wrapper and yellow top.

Mostly, I have an assortment of new and interesting bitters.  The first bitters that I learned could make a cocktail stand up and sing was Regans’ Orange Bitters.   I don’t even recall the cocktail now, but it made me run out and buy a bottle.

I just realized my new favorite bitters didn’t make the photo shoot because it’s still packed up from last week’s impromptu event on the go.  I’ve been having so much fun with Elemakule Tiki Bitters.  While it has flavor elements specifically for tiki cocktails, I’m finding it adds an interesting element to everything I’ve tried it in.

The little blue bottle on the far right is my own special concoction.  The Meadow in Portland is a little shop that specializes in salt, bitters, and chocolate.  A few years ago I took a bitters making class.  The had about 30-40 different flavor elements for you to taste and smell to combine into your own bitters.  Well, about half way through assembling my creation, I blew out my taste buds and had to ask someone how my final product was.  I didn’t get my sense of taste back until the next day, and found I had created a lovely little bitters that pairs beautifully with the herbal notes of gin.

I’m not leaving you this week with some fancy cocktail.  I’m leaving you with a simple drink that will make everyone at the party think you are drinking even when you are the designated driver.

Club Soda with a dash of bitters.  Ridiculously simple.  What’s the worst thing about club soda?  The taste.  A couple drops of bitters makes it interesting.

Don’t want to be the designated driver?  Then add an ounce or two of vodka to your soda, a squeeze of lemon, your bitters, and you’ve just made a spritzer.  The world’s easiest, and most refreshing cocktail.

Drink well this week and here’s another Toast to Tuesday.  Let’s see if Meg is enjoying her vacation too much to drink with us this week ;).

8 thoughts on “Toast Tuesday: Why So Bitter?”