Baking for a Cause: The Trilogy…

If it hadn’t been decided earlier (which I am sure it had) Lula’s Kitchen will never be a breakfast joint.  A) I’m not a huge fan of eating breakfast and B) I don’t like making breakfast.  And these past few weeks of baking for my big day of Rebuilding Together has confirmed, I don’t think I’m a fan of scones.  I’ve tried several recipes, some of which aren’t even worth a mention I was so disappointed.

Then I had the girls over for snacks and mimosas on Sunday and Megan summed it up best.  Scones are crispy pucks of dough.  I think that’s why I want such big flavors.  Because otherwise I’m eating the grown-up equivalent of kindergarten paste.  Boring and bad.  I’ll pass, thank you very much.

I did come up with a variation of Lemon Ginger Scone that is worth a word or two.  The girls seemed to approve, so I’ll share this little ditty.  I started with King Arthur’s Guaranteed Scone recipe.  It calls for 1-2 cups of add-ins so I added 1 cup of my candied lemon peel, which I diced nice and tiny.  I also added 1 cup of tiny candied ginger pieces.  I told you, I’m after BIG flavors. 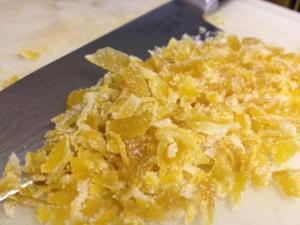 I liked them best right out of the oven.  The instructions called for placing the scones in the freezer for 30 minutes before baking for a better rise.  I did half that way and half the batch right into the oven.  I had NO difference what so ever.  It may be that I started with frozen butter that I grated with my cheese grater instead of their cold butter cut in with a kitchenaid (which I don’t have).

With this recipe, I finally got moderately even shaped scones.  I patted my dough into a circle and cut pie wedges.  I also made my scones slightly smaller than all the recipes called for.  Most are just too big.

So, if you are looking for a good scone recipe, I’d say give this one a shot.  I don’t think you’ll be disappointed.  Especially if you like a bite that bites back! 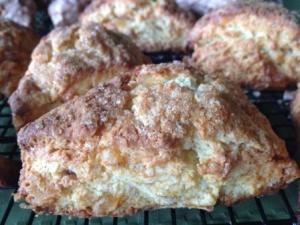